Could we have done anything to stop it? I wonder if this was a question on the minds of those who stood and watched the Crucifixion? Did Peter ask himself ‘What if I had not betrayed him?’ Did Mary feel not only the pain only parents can feel when losing a child, but also doubts and guilt? And the by-standers, who had shouted ‘Crucify him!’, did they regret their outspokenness? Maybe there was a little comfort in what Jesus had told them already: that he had to suffer and die, but even then: was it not for us, because of us that this was the sacrifice he made? 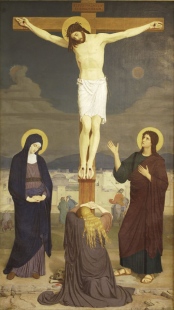 Eternal God,
in the cross of Jesus
we see the cost of sin
and the depth of your love:
in humble hope and fear
may we place at his feet
all that we have and all that we are,
through Jesus Christ our Lord.

I wonder also what we feel when we stand at the foot of the Cross on Good Friday. Could we have done anything to stop it? Do we feel complicit in Jesus’ death, in some way responsible?

When I moved from The Netherlands to Germany in 2010, there were still a number of friends – often a generation or two older than myself – who thought it unimaginable to move to a country that had cause so much pain sixty years earlier. Personally, I don’t think we can hold a whole people responsible for the atrocities that some of their ancestors committed, but on the other hand, I don’t dismiss the concept of collective responsibility entirely.

We may not be Theresa May or Jean-Claude Juncker, but I would say that we have a responsibility for the political climate in which we live. Just as we may not own an oil company, but it is undeniable that we too have contributed to the climate crisis in which we find ourselves.

These are of course contemporary examples, which are slightly different from historical cases, the matter of which is even more complicated. Can we be held accountable for the misdeeds of our predecessors? A question particularly pertinent for the Church at this time of investigations into historic sexual abuse cases.

So when in the words of one of the collects for Good Friday we pray that we may place at Jesus’ feet all that we have and all that we are, we pray this not just individually, but also collectively; these words do not only apply to me, they apply to us. The only problem – or maybe just one of the problems – of this way of thinking is that we can either feel overwhelmed by the complexity of the situation, or feel we have no part to play at all. In either case, we may become complacent about our role in the collective.

However, it was only yesterday that we were reminded of the new commandment Jesus had given his disciples: love one another as I have loved you. This commandment to love binds the individual and the collective together. Each of us needs to love all of us – a tall ask! The love Christ set as an example was a self-giving love, as he had shown in the washing of the feet. A love that seeks the best for others, not just for ourselves.

So maybe today, as we place ourselves at the foot of the Cross, we are not only bidden to look up to the Cross, but also to look sideways to each other. Not to accuse, but to love; not to point the finger, but to offer a shoulder to cry on. It is then that we start to see not just the cost of our sin, but the depth of God’s love.

The Lutheran pastor Martin Niemöller (1892–1984) encapsulated it as follows:

First they came for the socialists, and I did not speak out—because I was not a socialist.

Then they came for the Jews, and I did not speak out—because I was not a Jew.

Then they came for me—and there was no one left to speak for me.