This morning we hear two very different readings. Paul in his letter to the Colossians speaks in abstract theology about the image of the invisible God. He reflects on Jesus’ divine nature, the Word that was from the beginning and was made flesh. The mystery at the heart of our faith. In our Gospel reading from Luke – the familiar story of Martha and May –, however, we encounter once more the human side of Jesus. The man who was always concerned about others, who spoke with a wisdom which we can still hear today. Indeed, in Paul’s words, that is how the image of the invisible God is displayed: through Christ in all his divinity and all his humanity.

That means that wisdom is not necessarily something that is difficult to understand. To be wise is not the same as to be learned. And so the message contained in the short Gospel passage is simple, yet significant and profound.

END_OF_DOCUMENT_TOKEN_TO_BE_REPLACED

The Parable of the Good Samaritan

It’s a very familiar story we hear this morning, the parable of the Good Samaritan, and maybe too familiar to really appreciate the ways in which it tries to provoke. Jesus uses the story as a reply to a lawyer wanting to test him and to justify himself by asking the question ‘Who is my neighbour?’ On one level, the story speaks for itself by conveying a truth we all know instinctively: being a good person depends on what you do, not on your religion or status. We all should act as the Samaritan did, looking out for those in need, no matter who or where they are.

Recently, I watched the film ‘My name is Khan’, a moving film around religious divisions as well as human goodness. An autistic Muslim man seeks to meet the president of the United States after his stepson is killed in the wake of 9/11. Encountering a range of people as he travels, he holds on to the truth told he was told as a child by his mother: there are only two types of people, those who are good and those who are bad.

END_OF_DOCUMENT_TOKEN_TO_BE_REPLACED

“While they were talking and discussing, Jesus himself came near and went with them.” A third reflection on the nature of friendship, looking at the importance of sharing our experiences.

One of the first things one learns when undertaking any pastoral training, is never to say “I know what you are feeling”. None of us know what someone else feels, particularly not when they have experienced something we have not. However, I suspect many of us have also been in situations when we did have the sense that the other knew what we felt, and were indeed much comforted by this experience.

In those conversations, our experience mirrors the encounter between Cleopas and the other disciple as they are on their way to the village called Emmaus (Luke 24.13-35). It is the day of the Resurrection as they are discussing everything that has happened in the last few days. Presumably still scarred by the reality of the Crucifixion, the two disciples are trying to make sense of the events and seek their significance. END_OF_DOCUMENT_TOKEN_TO_BE_REPLACED

Could we have done anything to stop it? I wonder if this was a question on the minds of those who stood and watched the Crucifixion? Did Peter ask himself ‘What if I had not betrayed him?’ Did Mary feel not only the pain only parents can feel when losing a child, but also doubts and guilt? And the by-standers, who had shouted ‘Crucify him!’, did they regret their outspokenness? Maybe there was a little comfort in what Jesus had told them already: that he had to suffer and die, but even then: was it not for us, because of us that this was the sacrifice he made?

Eternal God,
in the cross of Jesus
we see the cost of sin
and the depth of your love:
in humble hope and fear
may we place at his feet
all that we have and all that we are,
through Jesus Christ our Lord.

I wonder also what we feel when we stand at the foot of the Cross on Good Friday. Could we have done anything to stop it? Do we feel complicit in Jesus’ death, in some way responsible?

END_OF_DOCUMENT_TOKEN_TO_BE_REPLACED

Today, the Fifth Sunday of Lent, marks the beginning of Passiontide as we are drawing closer to Holy Week and Easter. The reading from John’s Gospel this morning almost cannot be any fuller with themes that foreshadowing the events to come. To fully appreciate the richness of this text, it is important to remember is that John’s Gospel was the last of the Gospels to be written, probably towards the end of the first century.

John’s purpose is to articulate the belief that Jesus was the Son of God, who was born in human form, died and rose again. He is trying to understand and to help us understand what it means for the Scriptures to be fulfilled as the Word became flesh. In contrast to some other parts of Scripture, I would like to suggest therefore that the theological background of this particular passage is more important than its historical context, and so that is what I would like to focus on this morning, hoping that it will give us a better appreciation of what Jesus may have meant by that last – easily misinterpreted phrase – ‘You always have the poor with you, but you do not always have me.’

END_OF_DOCUMENT_TOKEN_TO_BE_REPLACED

Quite a controversial reading this morning, I suspect – I hope! When I looked at the reading suggested by the lectionary, my first thought was to choose another one. Although some of you may agree with my interpretation of this reading, I am almost sure that what I will say this morning may upset and offend some people. Others may think that I am plainly wrong. For someone who doesn’t like an argument, that’s not great.

END_OF_DOCUMENT_TOKEN_TO_BE_REPLACED 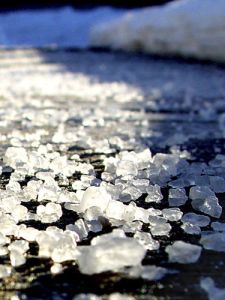 Starting at the end of the Gospel reading, I’d like to work back toward the reading from James’ letter, making some observations on the way. The Gospel reading set for today ends with the phrase ‘Have salt in yourselves, and be at peace with one another’. At the face of it, two competing principles. Having salt in ourselves: standing up for what we believe in; and yet being at peace with one another: making sure that relationships are harmonious.