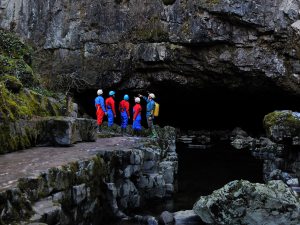 In the Church year, today, the Sunday after Pencecost is known as Trinity Sunday. So, obviously, I have spent most of Shell OA week [a week of outdoor activities in the Brecon Beacons] not thinking about my wet feet, or my wet sleeping bag, or how to make the best hot chocolate for the New Court Shell, but about the best, least boring, way to explain the Trinity this morning. Thus, in the middle of the caves on Thursday, again water-soaked, I realised that maybe there is a comparison to be made between going to Chapel and caving. Hence, as Mr Clark still seems to be employed after comparing Pentecost to Love Island last week, I decided to take the risk. But more about that a bit later.

The Trinity, the belief that God is Father, Son and Holy Spirit, yet one God, is possibly the most complicated concept of Christianity. Hence, most Christians theologians agree that it is impossible to fully comprehend it, just as it is impossible to fully comprehend God himself. Of course, those sceptical of Christianity may reply that the fact that the concept of the Trinity defies logic is of itself proof that God cannot, and therefore does not exist. Followers of other monotheistic religions accuse Christianity of heresy by claiming that God is three persons in one.

END_OF_DOCUMENT_TOKEN_TO_BE_REPLACED

‘Education is what remains after one has forgotten what one has learned in school.’

It seems pretty obvious to ask a School Chaplain to write a reflection on school chaplaincy. However, in some way, I feel that I am even less qualified to write something about this now – with the little experience I have – than I was a term ago, without any experience. So I asked myself the question: what would I hope that pupils, and staff for that matter, remember when they think about the chaplaincy at Marlborough College a good few years after they have left? What remains after they have forgotten what was actually said? END_OF_DOCUMENT_TOKEN_TO_BE_REPLACED