One of the things I dislike is when someone tells me what to do, and I am sure that I am not the only one. Here at school there are quite a lot of things you are told to do, and I suspect that some of you feel the same about those things as I, when I am told that I have to do something. There are quite a few things in life you will just have to do. Not only when you’re at school, but also when you embark on your next stage of life and even beyond. Fortunately, there are also a lot of things you are invited to do, and often they have a very different feel to it.

For example, when I was in the last year of my Master’s course in physics, I was invited to go to an annual conference to present the research that I had been doing. It was a real honour to go and to be part of the ‘grown-up’ scientific community and I very much enjoyed the couple of days full of lectures and talks. The next year, when I had started my PhD research in the same field, attending the same conference was no longer an invitation, but an expectation. As soon as my supervisor told me to go, the conference lost its appeal, and I did no longer want to. Although my interests hadn’t changed, nor the topic and format of the conference itself, the fact that I was told to go, spoilt it for me altogether.

END_OF_DOCUMENT_TOKEN_TO_BE_REPLACED

This last weekend of June is traditionally the time at which ordinations take place, as on 29th June the Feast of St Peter and St Paul is celebrated, two of the earliest followers of Christ. In cathedrals across the world, people are committing their lives to a diaconal or priestly ministry, promising before God and others to serve the Church in this particular way. Ordinations are a public commitment to a certain way of life, of discipleship, in a similar way to confirmation and baptism, as well as weddings. What all these services have in common, I think, is that they give everyone an opportunity to celebrate, as well as to reflect on our own unique calling, expressed through the commitments we ourselves have made at various times in our lives.

There are many different ways in which we can think of our own discipleship, often without using that word itself. This morning I would like to focus on one particular aspect, which is also mentioned in our reading from Paul’s letter to the Galatians, and that is our freedom in Christ. Making a commitment seems almost the diametrical opposite of being free, but I would like to suggest that in reality our commitment to God is what enables us to embrace our freedom.

END_OF_DOCUMENT_TOKEN_TO_BE_REPLACED

I guess we all know that moment: when we have tried, and tried and tried, and we have reached the point we know we cannot do it. Whether it’s the further maths problem: a proposition impossible to prove, or the perfect short corner in hockey: something that looks so straightforward when you see someone else doing it. We have tried, not once, not twice, but many times, and we’re ready to admit: we just can’t do it. 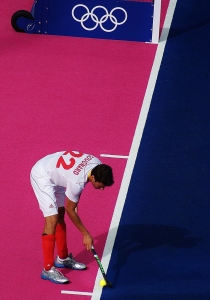 What’s your first reaction when someone then says “Try it again, just once more.”? I suspect that you also, just like me, are tempted to say something better not repeated in Chapel. “It’s not for a lack of trying, isn’t it? There are times when things don’t work, and we need to give up,” is what we’d like to say.

That is precisely, I think, how the fishermen in the boat in our reading this morning are feeling. Frustrated, tired, and ready to give up. So when Peter says to Jesus “We have worked all night, but have caught nothing. Yet, if you say so, I will let down the nets”, we can almost hear him saying: “Yes, whatever” in a similar way we ourselves would do, or indeed have done. But then, a miracle happens: when Peter and his companions let down the nets once more, they catch so many fish that they can’t even pull them back into the boat themselves. Their success, so to say, is beyond imagining.

END_OF_DOCUMENT_TOKEN_TO_BE_REPLACED

Today’s Gospel reading follows last week’s reading of the feeding of the five thousand. As then, also now, we are invited to reflect on who Jesus is using the familiar image of bread. Last week’s message in many ways was a very comforting one, both for the early readers of the Gospel as well as for us. With God there is always enough and even more. God gathers up what is left over and it is used. Both messages that give us reassurance about God’s loving nature and his care for us. END_OF_DOCUMENT_TOKEN_TO_BE_REPLACED

A reflection on Charlotte Mew’s Poem ‘The Call’

From our low seat beside the fire
Where we have dozed and dreamed and watched the glow
Or raked the ashes, stopping so
We scarcely saw the sun or rain
Above, or looked much higher
Than this same quiet red or burned-out fire.
Tonight we heard a call,
A rattle on the window pane,
A voice on the sharp air,
And felt a breath stirring our hair,
A flame within us: Something swift and tall
Swept in and out and that was all.
Was it a bright or a dark angel? Who can know?
It left no mark upon the snow,
But suddenly it snapped the chain
Unbarred, flung wide the door
Which will not shut again;
And so we cannot sit here any more.
We must arise and go:
The world is cold without
And dark and hedged about
With mystery and enmity and doubt,
But we must go
Though yet we do not know
Who called, or what marks we shall leave upon the snow.

END_OF_DOCUMENT_TOKEN_TO_BE_REPLACED

Jesus said: if any want to become my followers, let them deny themselves and take up their cross and follow me.

It seems a very straightforward message in today’s Gospel reading. What we need to do to follow Jesus is to deny ourselves, take up our crosses and follow Him.

Today is the first Sunday of Lent, the season in which Christians, as individuals and as a Church prepare to celebrate the Easter feast. Through fasting and self-denial; prayer and the study of Scripture; through worship and our daily acts, we try to align ourselves once more with God’s purpose for us.

This morning, we hear two readings that both explain to us what that purpose, God’s purpose for us, may be, so it is worth having a closer look at both of them, and to see how this may apply to us in our daily lives. And so, as we go through these texts, I’d like you to keep the question in mind: What am I for? What is my purpose? Or, most accurately, what is God’s purpose for me?

END_OF_DOCUMENT_TOKEN_TO_BE_REPLACED

It is the week before the spring half-term, which this year is also the week before the start of Lent. Two good reasons to take stock and see how far we got. Especially for those of us who have started something new at the beginning of the academic year, a lot will have happened since September, and it is good to take some time to see where we are.

END_OF_DOCUMENT_TOKEN_TO_BE_REPLACED

A sermon preached at Sherborne Abbey at the Sherborne School Service
Second Sunday of Epiphany: John 1.43-51

When I was coming towards the end of my time at school, I was thinking what to study. The options were: medicine, theology or physics. So, as you do, I went to visit some open days. Medicine was quickly removed as an option, as it required a lot of group work: something I didn’t really see myself doing at the time. Theology sounded interesting, but visiting the university’s open day, the second youngest student was in her 40s, so it didn’t promise a vibrant student life.

END_OF_DOCUMENT_TOKEN_TO_BE_REPLACED

A reflection on what truly matters

For where your treasure is, there your heart will be also.

Have you ever really, really wanted something? Not just wishing it, but with your whole being really wanting it? I’m thinking not just of objects, or presents, but more of achievements or particular situations you would like to be different. For example, you may want to do particularly well in a physics test, or be selected for the first team in netball or hockey. Maybe you want a particular relationship to be better, or – thinking big – peace in the world, or at least a bit more of it.