This is the first of five reflections on my pilgrimage to Santiago de Compostella. During ten days over half-term, I walked from Leon to Santiago. Although it was by no means the full length of the French Way, it was long enough to make it a worthwhile experience.

When I was thinking what to do with my two-week break during half term, I landed upon the thought of walking a stretch of the famous Camino. Having done my research, October seemed a good month to walk as the weather is generally settled and the number of pilgrims is lower than during the summer months. Without much time to train, I decided that about 20km per day would be a reasonable distance, with enough time to rest, think and pray, presumably in the late autumn sunshine.

Having waited booking my flights, trains and first night’s stay until after the start of term, this became a rushed job between lessons and other activities, so it was not until a couple of weeks before I started that I realised that my starting point should have been Ponferrada, not Leon. Well, 315km is not that much further than 200km!

I arrived in Leon on the evening of Saturday 11th October and had a little taste of the city’s evening life, the streets bustling with people. I left early the next morning, my rucksack packed with all I needed for the next fortnight, including the last-minute packed waterproofs, just in case. As it turned out, the day I arrived was the last day of warm weather in Spain, and quickly it got colder and wetter. There were days with showers, days with drizzle and days with pouring rain. I had certainly not expected to walk at least two hours in the dark and rain each day, although I guess I could have looked up the daylight hours beforehand!

Journeying remains a good metaphor for life, and so this journey too. When I was walking in the early hours of the morning, I did not know whether it would get dry that day, but I did know that it would get light. We know that there are things that will get better, and things that won’t. It is also true that your perspective changes depending on your circumstances. By 9am on the morning after a particularly wet day, I got very excited that I had only had a couple of showers so far.

One of the most beautiful pictures I took was of a rainbow piercing through the clouds, something that required the rain as much as the sunshine. And of course, it gives a sense of accomplishment as well as camaraderie with others on their way, equally wet and cold.

However, maybe the most powerful realisation I had was that sometimes life comes as it is, and there is nothing anyone can do about it. We cannot change what is happening around us, nor can we expect anyone else to do so, our only freedom is how we respond.  Indeed, there were moments when, if I could have done so, I would have picked up the phone to call a taxi – usually, though, this happened in the middle of a deserted track or woodland path. Or I wanted to explain to someone how unfair it was that it was cold and wet, instead of the Spanish autumn sun that I had expected.

There were also times I blamed myself for being stupid enough to go and walk in the rain. If I would get lost in the dark, or would slip in the mud, or would get a cold, it would be all my own fault. However, also this is a silly thought. I did not get lost – ok, maybe once –, I did not slip, and I did not get ill. And even if I had, these things just happen: they are part of going on a pilgrimage. More often than not, there is no-one to blame, even not myself. 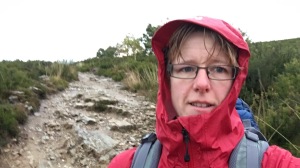 That thought made me smile. It showed that I take myself, and others, a little too seriously at times. There is nothing wrong with walking in the rain for a day or two, it was still an amazing experience! And it means that next time I’m in Wales, where it always rains, I can think back fondly to the muddy paths in Spain.

Would I have preferred the sunshine? Yes. Did I enjoy the rain? No. Was it one of the most interesting and life-giving journeys I have made? Most certainly. Sometimes it rains. That doesn’t spoil the journey, only we ourselves can do that. There is no reason why we should, so don’t let it happen.

One thought on “Sometimes it rains”