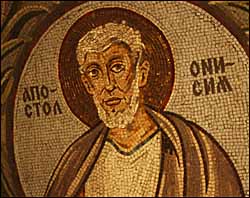 Paul’s letter to Philemon, which we hear this morning, is one of the shortest books of the Bible. We have just heard most of it, apart from the final few verses. Most scholars agree that the letter is authentic and written by Paul in prison, either in Ephesus or in Rome.

The letter is addressed to Philemon, who has been assumed to live in Colossae, given the overlap of personal names in this letter and Paul’s letter to the Colossians. The traditional and most common interpretation of the letter is a literal one, in which Paul appeals to Philemon on behalf of his slave, Onesimus, whom Paul has met in prison. Onesimus has run away from his master, and been baptised by Paul in prison, and is writing to Philemon to welcome him back, not as a slave but as a brother.

In a world in which slavery was still very much the norm, this would have been a bold, if not outrageous, request, particularly as it sounds that Onesimus has wronged his master in some way. Therefore, in this letter, we see how challenging the message of the Gospel was to the culture and norms of its time. When Paul wrote that in Christ there is no Jew nor Greek, no slave nor free, he did not only mean this figuratively, but also literally.

We may not feel that challenge as much as it was felt those two-thousand years ago that this letter was written, but we probably do feel the challenge of our Gospel reading this morning: “Whoever comes to me and does not hate father and mother, wife and children, brothers and sisters, yes, and even life itself, cannot be my disciple.” And “therefore, none of you can become my disciple if you do not give up all your possessions.”

Those are challenging words, and most of us would certainly hesitate to take them literally. As we reflect on these readings, we notice that the challenge does not only lie with the person who chooses the way of Christ, but also with those who are left behind. In this case Philemon, the slave master, and those family members left behindIt is one thing to give something up voluntarily to follow a way of life in which we believe, but another thing altogether to be forced or asked to make a sacrifice for someone else.

But yet, as Paul suggests to Philemon, it is doing that which ultimately will give us our freedom too. Onesimus, no longer useful as a slave, but useful as a brother, a friend and an equal. Giving someone else their freedom is maybe the hardest but also the most liberating thing to be able to do. So also for parents, I suspect, although I cannot speak for myself. It can be hard to accept the choices of children, especially when these very choices seem to take them away from you. But in giving someone else their freedom, also lies our own freedom. In trusting God’s will for their life, lies the confidence that God’s will be done in our lives.

To finish, I would like to encourage all of us to think how we can help others to be free. Whether that is those we know well, or those we know less well. Are there times when we see others merely as parts of our lives; times when we need to change our perspective and work for their freedom, even if there is an apparent cost to ourselves?