Blessed are the peacemakers, for they will be called children of God. 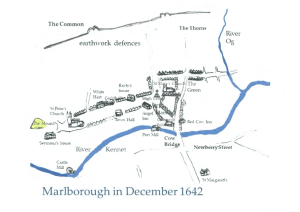 I have to admit that writing a sermon for last year’s Civic Service on the theme of ‘Education’, was a little bit easier than this year, when the service is taking place in the weekend in which we commemorate and re-enact the battles that took place in Marlborough in 1642. For those interested, according to local tradition, the bullet holes can still be seen on the outside of the St Mary’s Church tower.

It may disappoint some of you – but please others – to hear that I won’t go into much of the historical detail of the Civil War. Firstly, because I am not an historian, but also because I would be too worried upsetting people by presenting a particular interpretation of history – something that is easily done, especially for someone of a different nationality.

Therefore, what I do like to do this morning is what we often do in Church on a regular Sunday. We ask ourselves two questions ‘what does this have to do with me?’ and ‘why does this have to do with me?’ Unfortunately, I wasn’t able to go yesterday to be inspired by the Puritan preachers here at St Mary’s, but preaching, I believe, is about bringing together ourselves, our context, our history and indeed God’s word.

The first thing that I would like to note is that a service like this shows our commitment to the belief that God’s word does not only speak to Christians on a Sunday, but to everyone all the time. We believe that whether you share our religious language and ritual or not, there is a fundamental truth and wisdom contained in Scripture and tradition that speaks to each of us, no matter our own convictions and circumstances.

Having tried to avoid historical controversy, I appreciate that I am now on controversial theological terrain! That thought brings us neatly to the second point I would like to make, and that is that it is fine, and maybe even necessary, to disagree and to talk about differences in religion, conviction and culture. Of course, I don’t mean here persecuting or killing people for what they believe or who they are, but exactly the opposite.

The conflict between the Catholics and the Protestants was one of the major contributors to the English Civil War. I wonder how much of that conflict was about things that mattered, or things that mattered less? I remember the first time I went to church in my university city. The minister wore a white robe instead of the black robes that I was used to. It almost stopped me from going back, but I am very pleased I did. Coming from a rather Puritan background myself, I learnt to appreciate the value of tradition, and maybe more importantly, I realised that it didn’t matter that much how we worshiped, but it mattered more how our beliefs shaped our actions.

So that brings us to the third and – you’ll be pleased to hear – last point I would like to make. That, although our beliefs matter, it matters more how those beliefs shape our actions and the people we choose to be.

Whatever we think politically, we cannot deny the problems we face: refugees and immigration, climate change and the reality that there are people who do not have the means to provide a decent standard of living for themselves and their families. These problems are not political, they do not depend on your point of view, but they are real.

That is the challenge with which we are faced at this time: the problems are clear, but the solution not straightforward. Towards the end of this service we will commission our Mayor and Town Councillors, people who have chosen to serve our community and to respond to the challenge by taking public office. It is a huge responsibility, and no matter our own political convictions, I think we should be grateful and encouraged for the office they have taken and the work they will do.

At the start of this sermon, I mentioned that preaching is finding a connection between ourselves, our context and history and God’s word. This morning’s readings speak for themselves, I think, particularly in the light of what we have been thinking about so far. The passage read by our Town Mayor is familiar to many, the start of Jesus’ Sermon on the Mount. It is not a bad manifesto by which to live. It speaks of hope, of being blessed, but also of what is needed to get there. Hunger and thirst for righteousness; be merciful and pure in heart; be a peacemaker.

However, those are the fundamental values that make us human, so let’s not lose sight of them. The Civil War of the seventeenth century was the last one fought on English soil, and it taught us religious toleration and the danger of absolute power. Let us then be committed to that legacy, and try to work with each other rather than against each other as we look to address the challenges ahead of us.

Blessed are the peacemakers, for they will be called children of God. That is our faith, and that is our hope.

One thought on “Marlborough under attack”