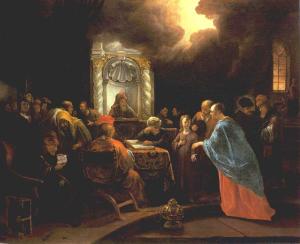 Traditionally, well, at least since the 1970s, this first Sunday after Christmas is often celebrated as the Feast of the Holy Family. As we hear about Mary, Joseph and Jesus, we are invited to see them as a model for all Christian families, and, I suppose inevitable, reflect in how far we live up to that standard. I think whoever had the idea of placing this particular celebration just after Christmas, either did not have a family, or had a good sense of humour, or was one of those people who had the perfect family – a person I have yet to meet!

Of course, hopefully, over the past few days, most of us will have had the opportunity to spend time with family, or families in some way or other. Time with children, grandchildren, parents, grandparents, or with friends who have become like family. Time to celebrate, be together, and eat together – often a bit too much. But, no matter how much we have enjoyed our celebrations, I think we also realise that the perfect family – whatever that may look like – does not really exist. For many of us, this time will also remind us of the more painful moments in our lives, often connected with what has happened to those nearest to us, or between us and them.

So, after this rather long-winded introduction, this morning, I don’t want to think too much about what our readings may have to say about our family life and relationships, or at least not directly. However, I would like to suggest that this particular Gospel reading, about Jesus’ appearance in the temple, is actually another episode of the Christmas story itself.To appreciate its significance, as well as the significance of the Christmas story itself for that matter, it may be worth reminding ourselves that the Gospels are not written as a series of stories, of which we hear one every Sunday, in the way some of us may listen to the Archers.

Two things in particular to say here are that, first of all, the Gospels were written after Jesus’ crucifixion and resurrection. When Luke compiled his narrative, in about 80 or 90 AD, he knew what Jesus’ ministry had looked like, and how through Jesus’ life, death and resurrection it had become clear that he was the long-expected Messiah. Secondly, the Gospels are a genre in themselves. They are not fiction, but they are not bare fact either: whatever has been written, was written for a reason. And that reason was more often theological than not: trying to explain who Jesus was, and what this meant.

So, with this in mind, let’s look more closely at the second chapter of Luke’s Gospel, the chapter containing the Christmas story itself, the presentation of Jesus in the temple and the passage we heard this morning. And as we do this, we will see that one of main aims of the narrative is to convey the insight that Jesus is God’s Son, again, an insight that was only fully appreciated after the crucifixion and resurrection.

In today’s passage, particularly the resonances between Jesus’ childhood and the childhood of Samuel are apparent. “And Jesus increased in wisdom and in years, and in divine and human favour”, does not sound unlike “Now the boy Samuel continued to grow both in stature and in favour with the Lord and with the people”.

These parallels are not only there to emphasise the Christian belief that Jesus is the fulfilment of the Jewish scriptures. Also in their function, they play a very similar role. The point of this story about Jesus’ childhood, one of the very rare ones in the Gospels, is not to describe what Jesus was like as a child, but to understand what he will be like as an adult. Both Samuel and Jesus grew up to be people of wisdom, and people of God, and that is precisely what these stories indicate.

So, when Jesus says to his parents: “Did you not know that I must be in my Father’s house?”, we can already hear the echoes of what he will say to his mother and brothers later, when they come and look for him amongst the crowds: “My mother and my brothers are those who hear the word of God and do it”. And so also with his obedience. Unlike the suggestion of the famous Christmas carol, it is not something all Christian children must be, but Jesus’ obedience here foreshadows his obedience later, as Paul says: “to the point of death – even death on a cross”.

For the original recipients of the Gospels, all these parallels were much more alive than they are for most us now, especially if we are relative new-comers to these stories, and so an analysis like this may sound a bit far-fetched, looking for things that aren’t there, the endless analysing of texts as you may have done in your English lessons.

So, if you’re not quite the analysing type, maybe an alternative approach when you hear or read these stories, could be, to expect something new, something unexpected, whether you hear them for the first time or have heard them many times before.

This coming year, Luke’s Gospel plays a major part in our readings on Sunday. Of all four Gospel writers, Luke is the best story-teller. What that means also, is that often we will be able to recognise ourselves in the characters, or see something of our own lives reflected in the stories. Because, ultimately, that is the message of Christmas: that God came to live with us, so His story is our story too. And thus, before moving on, I’d like to invite you just for a few moments, using the reading sheet or not, just to reflect what was unexpected for you to hear, and let this accompany you in the days to come. Amen.