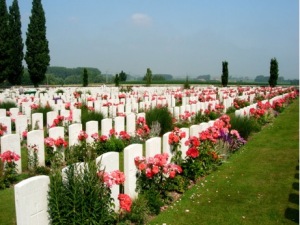 It is good to see so many people here this morning: the Mayor and Town Council, members from the Fourth Military Intelligence Battalion, Cubs, Scouts, Brownies, Air Cadets and people from the Town. Thirty years ago, it was generally assumed that people would slowly lose interest in Remembrance Sunday, as fewer and fewer of us have lived through, let alone fought in, a war.

However, as we have commemorated the centenary of the First World War, the last four years have seen a renewed interest in the lives and stories of those who fought and died in the trenches. In many ways, I think that I, we, have very little authority to speak about them and their experience. Those who were there at the time and survived, were often unable to speak about what had happened, as it was too horrific to put into words, and so I would like to suggest that we can only do so, because we don’t know what it was like.

What we can speak about with integrity, however, is the impact the lives and memories of those who fought have had on us; one, two, three or even four generations on. Of course, there is the bare fact that we have freedom, democracy and justice, for which we have to thank them. But the Great War in particular, and subsequent conflicts too, have shaped who we are: as a nation, as a continent, and as individuals.

Many of us will have visited a Commonwealth War Cemetery at some point. Maybe in Ieper or Passchendaele, or maybe elsewhere further afield or nearer at home. We may have gone to visit the grave of an ancestor, either for ourselves or on behalf of our family. Overwhelmed by the vast number of graves, it is often the small details we remember.

I was talking to someone last week, who had visited the graves of two of her great-uncles. One of them was the fiancé of her great-aunt, and although they never married, he remained the uncle who never was. When she had found the headstone, it read something like ‘A beloved son and brother, forever remembered by Helen’.

It was an emotional and overwhelming experience, as not only did it bring home the loss of life and potential of so many, but also it showed how much this young man had been part of their family, even as his life had not been lived. He was loved, and continued to be loved, as a son, a brother and a husband to be.

Another way in which the lives of those who fought continue to touch us is of a slightly more personal nature, if you will forgive me. The first Remembrance Sunday I celebrated in this country, I had the privilege to meet someone who had fought on the beaches in Normandy in the Second World War. He spoke about his experience in a matter-of-fact way: nothing heroic or glorious about what he did.

But yet, he had left his family, his Town, the people he knew, to fight for the freedom of those he did not know. Families and people like my ancestors, those who lived in France, Belgium and The Netherlands. As he was speaking, I was suddenly filled with a sense of gratitude. A deep thankfulness for what he, and so many others, had done; had seen as their duty and had followed through.

So, although we cannot speak for those who fought, we can speak as those for whom they did. Us, whose lives have been touched and changed by those who sacrificed part of themselves, and in many cases all of themselves. And so I think, what we do today is simple: we give thanks. Thanks for our freedom, but even more so, thanks for those who gave it to us, often paying the highest price. Despite the matter-of-factness of so many, this gift is a sign of their commitment, their duty, and also their love: “No one has greater love than this, to lay down one’s life for one’s friends.”

We have been given the gift of life and of freedom. That is what we remember today, what we remember when we are silent for two minutes, when we wear our poppies: that we can be here thanks to those who have gone before us. As with any gift so great, we will not be able to reciprocate it. But I think it is important to remember that this is not required of us. As with any gift, it is not our duty to reciprocate, but to honour and to use it.

How? Again, I think it is simple: by loving one another, by caring for one another. Many of those who did manage to talk about their experience in the trenches remember the small acts of kindness. The packet of cigarettes that was handed out, the football match that was played one evening, the letter that was brought home.

That is how we can remember them: in seeing where we can show our love for and commitment to each other. For most of us, it will be through small acts, but for others, it will indeed be by risking their life in love and duty for those whom they know, or those whom they don’t. That is what we do today, when we are silent for two minutes, when we wear our poppies: we remember with thanksgiving the sacrifice they made, and we commit ourselves to a life worthy of what they did for us. Amen.