A reflection on what we say
Sixteenth Sunday after Trinity: James 3.1-12 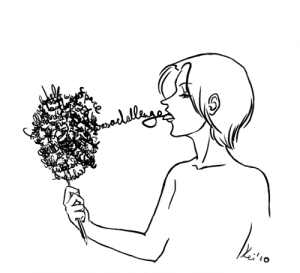 ‘Not many of you should become teachers’, is how James starts the part of his letter that the lectionary suggests for this Sunday. Because those who teach have an even greater responsibility in getting things right. So, no pressure there for those who teach then this morning. However, James is not just talking about those sitting on the back rows, but to each one of us who has some sort of responsibility and authority, so I guess that means all of us.

Words are not only important, they also have consequences. For example, last week, I may have implied by what I said that Classics is a better subject to study than Philosophy. No matter how much I have tried to apologies, my colleagues in the philosophy department still are not talking to me – maybe the fact that I teach in the languages block doesn’t help either …

However, words can also have very happy consequences. Yesterday, I went to a friend’s wedding, and for me this is one of the best examples of the significance of words. It is not the signing of the registers that marks the moment that the couple are married, but the vows that they say to each other: ‘I take you to be my wife’, ‘I take you to be my husband’.

In a church ceremony, after the couple have said their vows and exchanged their rings, it is again by words that the priest makes public, so to say, that the bridge and groom are now married by saying ‘I now declare that they are husband and wife’. And of course, for the couple, their family and friends, life will be very different because of these words.

So, we have to be mindful of what we say. Don’t be unkind, don’t gossip. One of the few things I remember from theological college was the Principal repeating what Bonhoeffer said to the members of his community: ‘Whatever you say about someone, you should be willing to say in front of them’. Not a bad measure to judge what you say about others!

There is one more thing about words I would like to address: that is that the words we say can change us. Not only in the sense of marriage, but also through a slow and steady process. For example, I am pretty sure that every time we say that we are tired, we get a bit more worn out. I’m not saying that you cannot be genuinely tired, of course, but the more you emphasise it, the worse it gets. The same is true for ‘busy’, ‘annoyed’, and equally, I’d like to suggest for ‘grateful’ and ‘happy’. Again, of course, I’m not trying to say that by just saying that we’re happy, life will be always great.

In the world around us, we can see much more scary examples of this, as we think of radicalisation in which people are told the same message over and over again, and start repeating this for themselves. Unfortunately, often messages of hate and violence, messages of destruction.

At the heart of the Christian faith is the belief that God created the world through the Word, the Logos. We can take part in that creative process when we use our words well and wisely. So that is something of which each of us needs to be reminded: to use our words carefully and wisely, to build up, rather than to destruct. And not to forget, also to set an example to others.